The World Validation App covers a typical App example you’d find in most Apps, including Login and Registration Forms to Sign In and Register new Users who are then able to access the same protected Services to maintain their own private contact lists. It’s a compact example that tries to cover a lot of use-cases typical in a real-world App, including maintaining a separate Data and DTO Model and using C# idioms like Enum’s for defining a finite list of options which are re-used to populate its HTML UI.

The UI for the same App is re-implemented in 10 popular Web Development approaches, each integrated with ServiceStack’s validation.

As of this writing there 4 different server HTML generated strategies that use HTML Form Posts to call back-end Services: 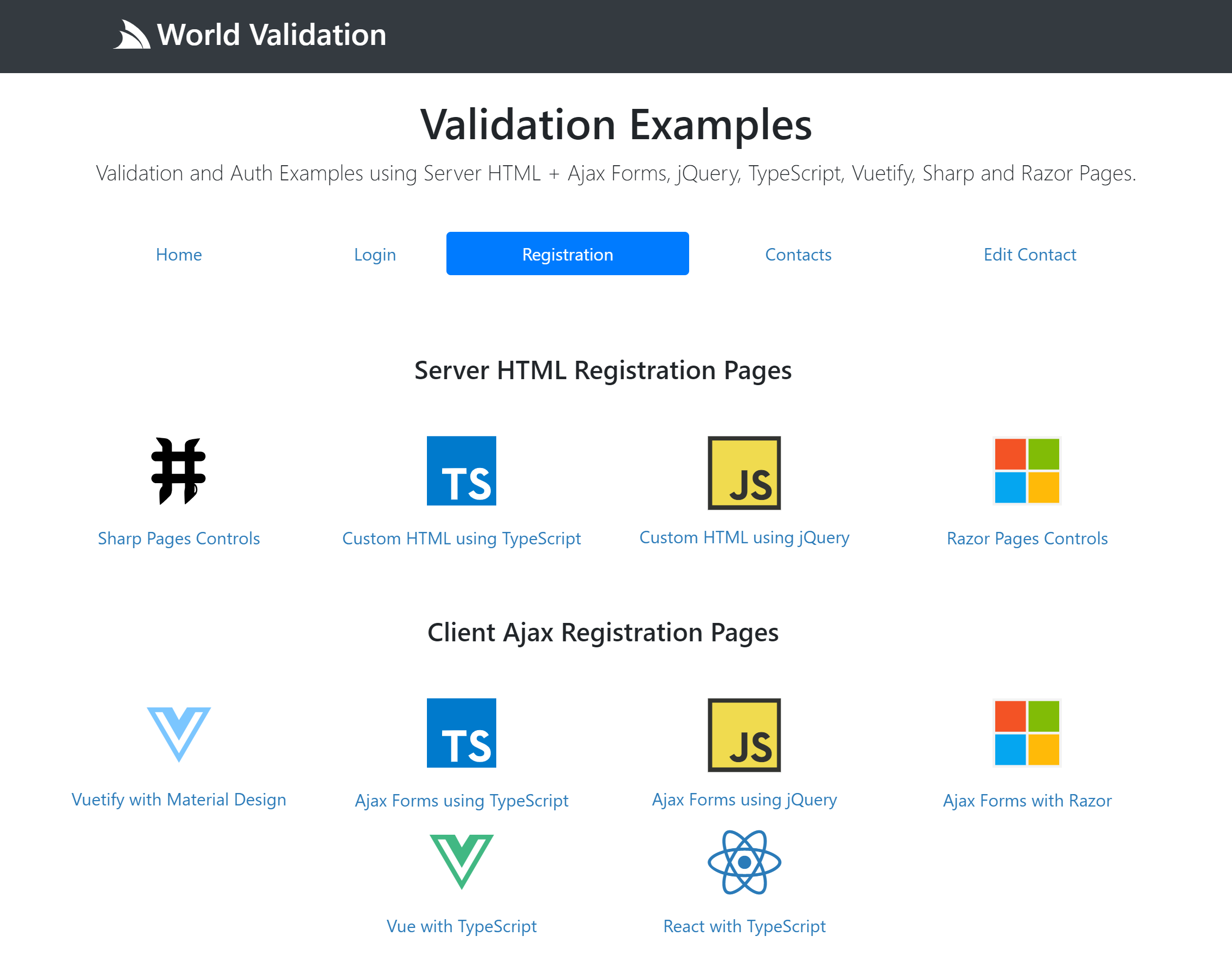 The Client Examples use Ajax Forms and the TypeScript JsonServiceClient to send TypeScript dtos.ts generated with TypeScript Add ServiceStack Reference:

The source code for all different strategies are encapsulated within their folders above except for the Razor examples which need to maintain their shared resources in the /Views folder (representative of friction and restrictions when working with Razor).

This is the shared backend Server implementation that all UIs are using:

All Auth Configuration is encapsulated within a “no-touch” IConfigureAppHost plugin that’s run once on Startup:

All Services and Validators used in this App. Extension methods are used to DRY reusable code and a Custom Auto Mapping handles conversion between the Contact Data Model and Contact`` DTO:

The dynamic App data used within ServiceStack Sharp Pages and Razor pages are maintained within Custom ContactScripts and RazorHelpers:

Each UI implements 4 different screens which are linked from:

Despite their respective differences they share the same concepts where all validation errors are populated from the Service’s ResponseStatus Error Response. The UI implementations takes care of binding all matching field errors next to their respective controls whilst the validationSummary or errorResponseExcept methods takes a list of field names that they should not display as they’ll already be displayed next to their targeted control.

We’ll cover just the Login and Contacts Pages since they’re sufficiently different, to see what this looks like in practice:

The Login Page contains a standard Bootstrap Username/Password form with labels, placeholders and help text, which initially looks like: 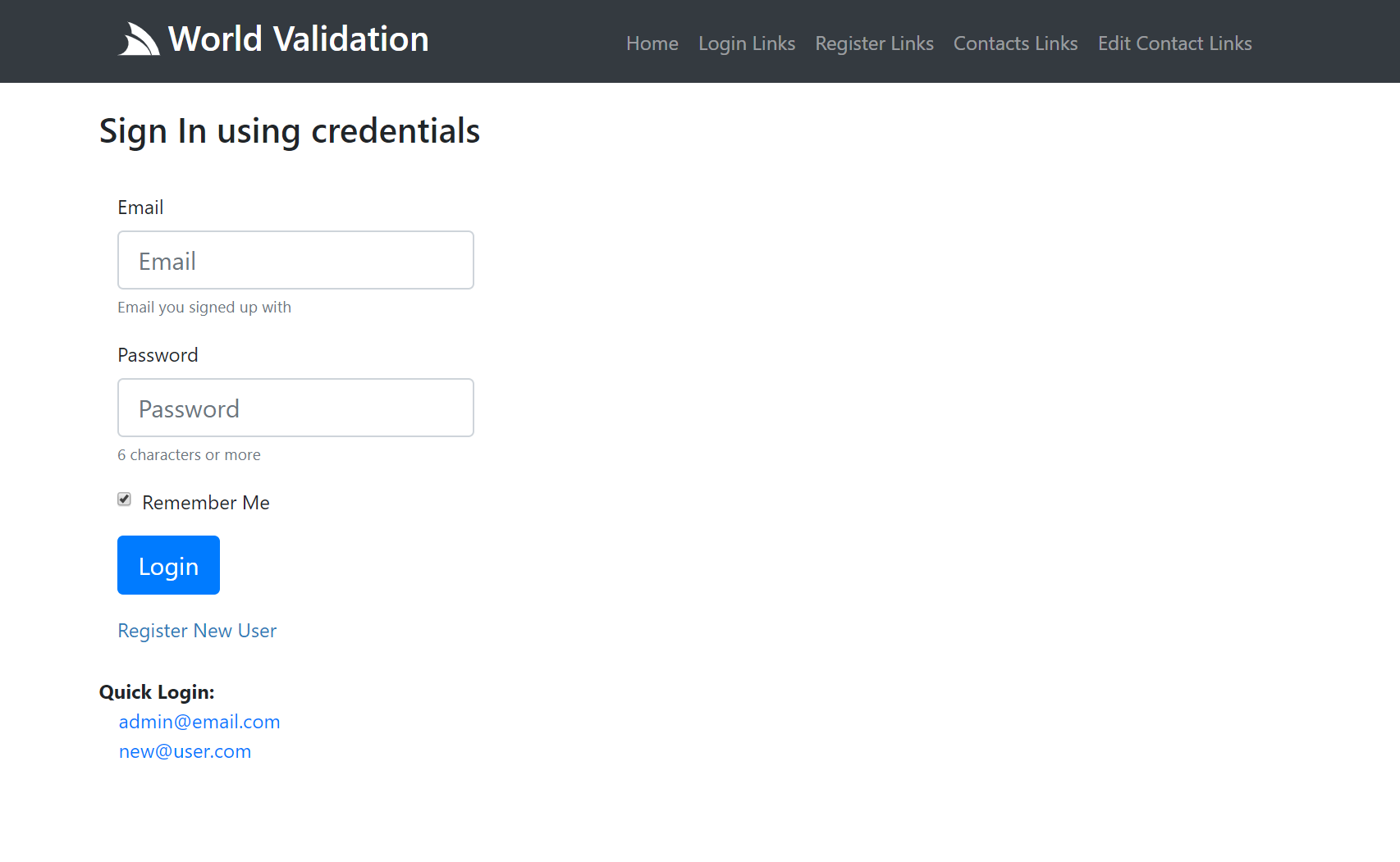 What it looks like after submitting an empty form with Server Exception Errors rendered against their respective fields: 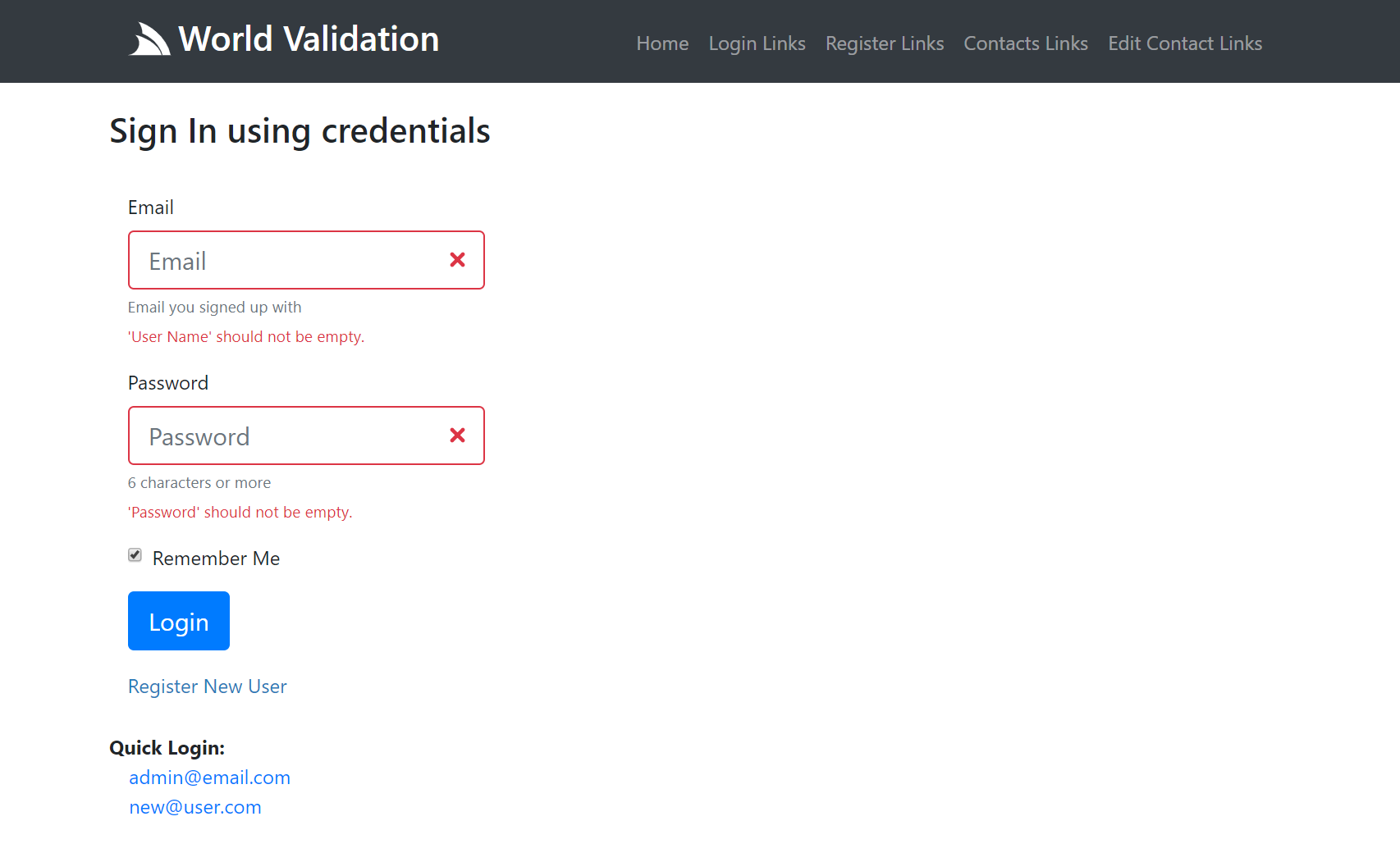 Unfortunately Validation in Bootstrap doesn’t lend itself to easy server rendering as it requires co-ordination with label, input and error feedback elements so Sharp Pages wraps this in a formInput control from BootstrapScripts to render both Label and Input elements together. For those preferring Razor, these same controls are available as @Html Helpers as seen in Server Razor which ends up having identical behavior and markup, albeit rendered using a different View Engine.

Server TypeScript shows a more fine-grained version where we show how to bind validation errors to your own custom HTML markup. This would normally end up being a lot more tedious to do so we’ve extended it with our own declarative data-invalid attribute to hold the fields error message which drastically reduces the manual binding effort required. Calling the bootstrap() method will scan the form for populated data-invalid attributes where it’s used to render the appropriate error message adjacent to the control and toggle the appropriate error classes.

All TypeScript examples only depends on the dependency-free @servicestack/client which is available as both an npm package and as a stand-alone servicestack-client.umd.js script include.

The Server jQuery version uses the exact same markup as Server TypeScript but requires a dependency on jQuery and uses the $(document).bootstrap() jQuery plugin from ServiceStack’s built-in ss-utils.js.

In order to enable full-page reloads in ServiceStack’s built-in Services like its /auth and /register Services we need to submit 2 additional hidden input fields: errorView to tell it which page it should render on failed requests and continue to tell it where to redirect to after successful requests.

In contrast to full page reloads all Client UIs submit Ajax forms and bind their JSON Error Response to the UI for a more fluid and flicker-free UX:

Vuetify is a Vue App which uses the popular Vuetify Material Design UI which is in contrast to all other UIs which use Bootstrap. It also uses the JsonServiceClient to send a JSON Authenticate Request whereas all other UIs sends HTML Form x-www-form-urlencoded Key/Value Pairs.

Client TypeScript only needs to render the initial Bootstrap Form Markup as bootstrapForm() takes care of submitting the Ajax Request and binding any validation errors to the form. The data-validation-summary placeholder is used to render any other error summary messages except for the userName or password fields.

The Contacts Page is representative of a more complex page that utilizes a variety of different form controls where the same page is also responsible for rendering the list of existing contacts: 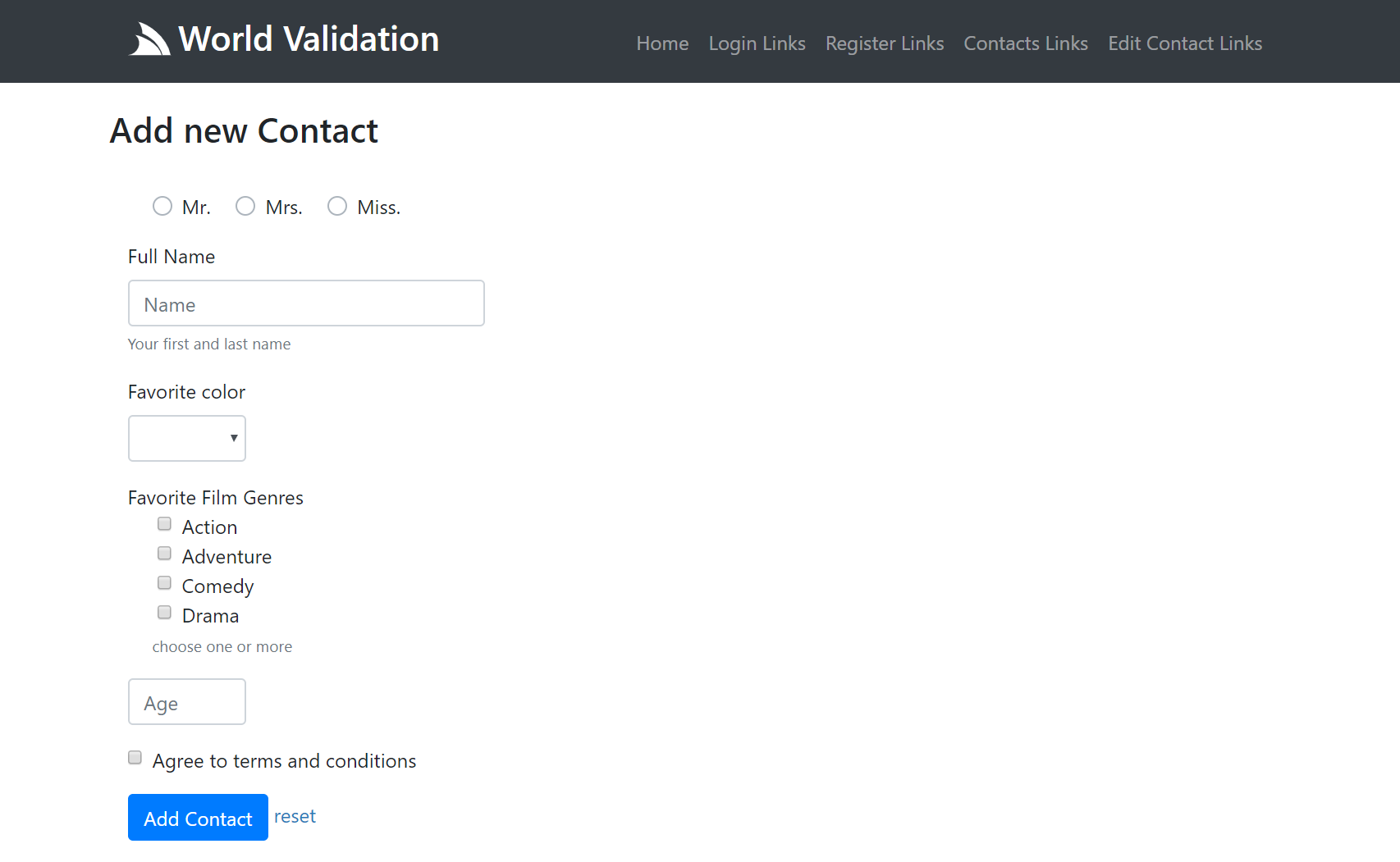 Here’s an example of what a partially submitted invalid form looks like: 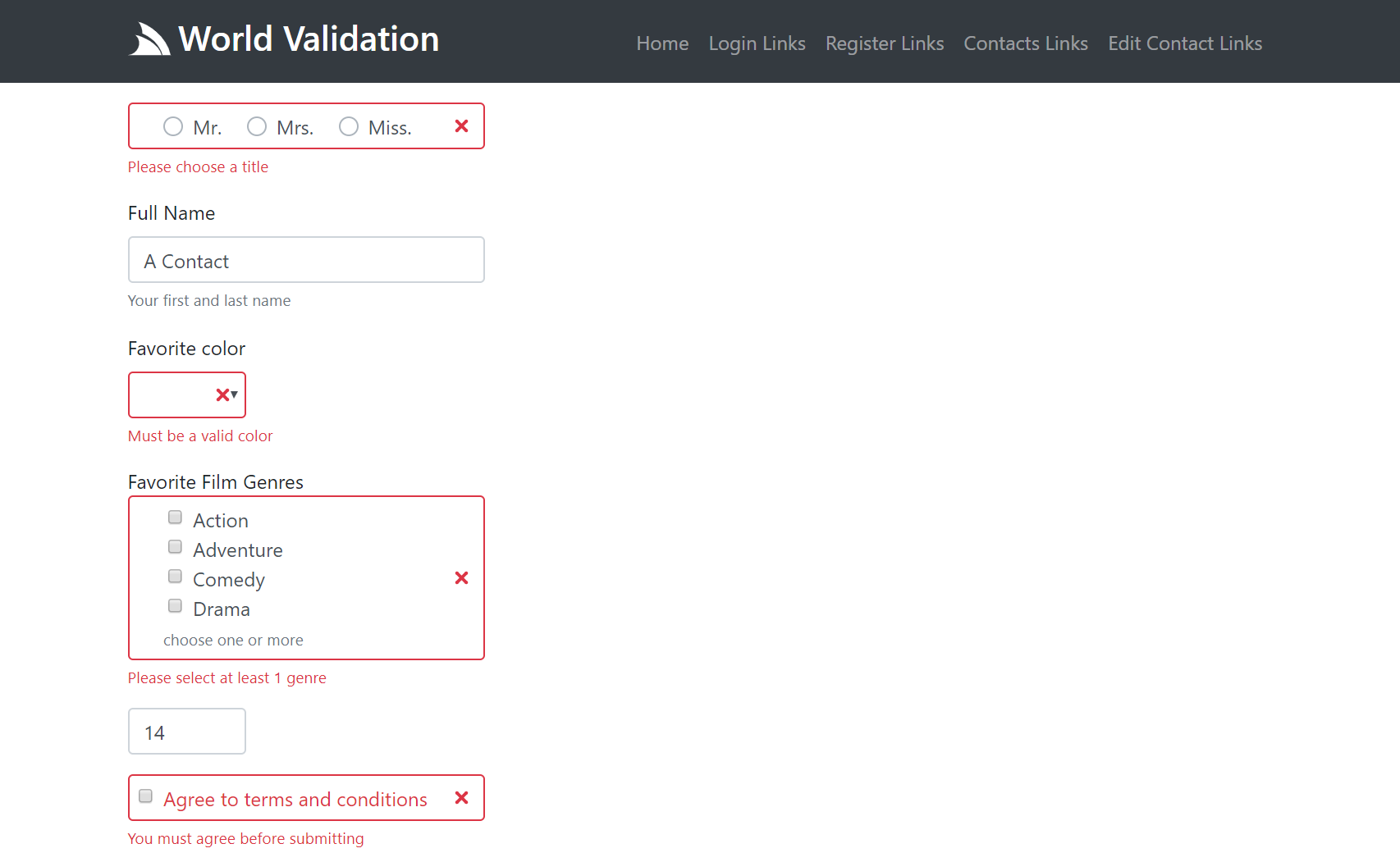 Both the Contacts UIs and Contacts Services are protected resources which uses a partial to protect its pages. Normally redirectIfNotAuthenticated wouldn’t require a URL, but one is needed here so it knows the right login page it should redirect to.

In Sharp Pages our wrist-friendly server controls are back as we start to see more of its features. The arguments of the left of the formInput are for HTML attributes you want rendered on the input control whilst the arguments on the right (or 2nd argument) are to enlist the controls other “high-level features” like values which is used to populate a list of radio and checkboxes or formSelect options. The inline argument tells the control to render multiple controls in-line whilst you can use help to render some help text as an aside.

We also see the introduction of the sendToGateway method used to send the GetContacts Request DTO to call its Service using the Service Gateway, the Response of which is used to render the list of contacts on the Server.

Another difference is that there are multiple <form> elements on this page to handle deleting a contact by submitting an empty form post to /contacts//delete.

Sharp Pages doesn’t need to specify its own ErrorView or Continue Request params as its the default view used for ContactServices:

This is typically all that’s needed, as most real-world Apps would rarely have more than 1 HTML View per Service.

With Server TypeScript you’re starting to see the additional effort required when you need to use your own custom markup to render form controls.

Deleting a contact is also handled differently where it uses the JsonServiceClient to send the DeleteContact Request DTO from the generated dtos.ts. After the request completes it uses GetContacts to fetch an updated list of Contacts which it re-renders.

Server jQuery adopts the same approach as Server TypeScript but renders it using jQuery and uses custom routes constructed on the client with jQuery’s Ajax APIs to call the ContactServices.

Server Razor is very similar to Sharp Pages but implemented using Razor. In many cases the built-in script methods in Sharp Pages have Razor equivalents, either in the base ViewPage<T> class like RedirectIfNotAuthenticated() or as a @Html helper.

Vuetify ends up being larger than other implementations as it also handles Edit Contacts functionality which is a separate page in other UIs. It also includes additional functionality like client-side validation enabled in each control using its :rules attribute. One thing that remains consistent is the way to call ServiceStack Services and handle errors by assigning it to this.responseStatus which the reactive errorResponse method uses to bind to each control.

The remaining client implementations show that whilst the server controls require the least code, if you need custom markup it’s much easier to render the initial markup once, then use bootstrapForm() to bind any validation errors and handle the ajax form submissions. It’s especially valuable when you need to update a form where the same markup can be populated by just assigning the model property as done in the Edit Contact Pages:

The amount of code can be even further reduced when using an SPA framework that allows easy componentization as seen in the Vue Form Validation and React Form Validation examples.