Our interim pre-release NuGet packages in between major releases on NuGet are published to MyGet.

If you have the dotnet x tool installed, you can configure your projects by downloading NuGet.Config in the same folder as your .sln

Instructions to add ServiceStack's MyGet feed to VS .NET are: 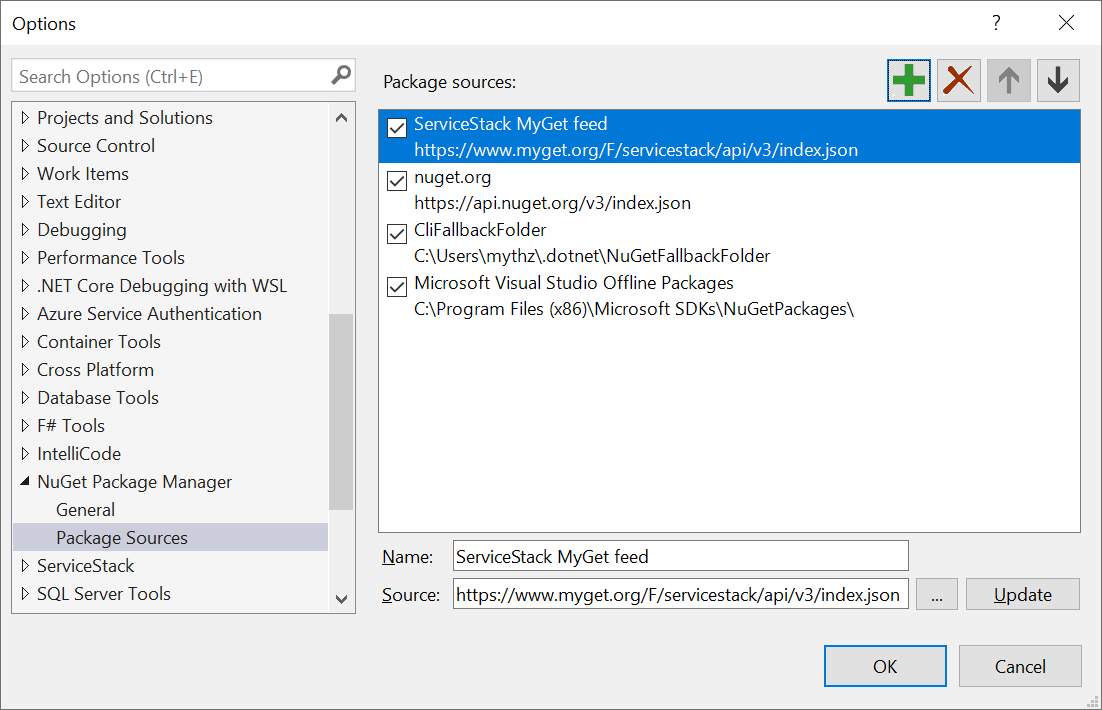 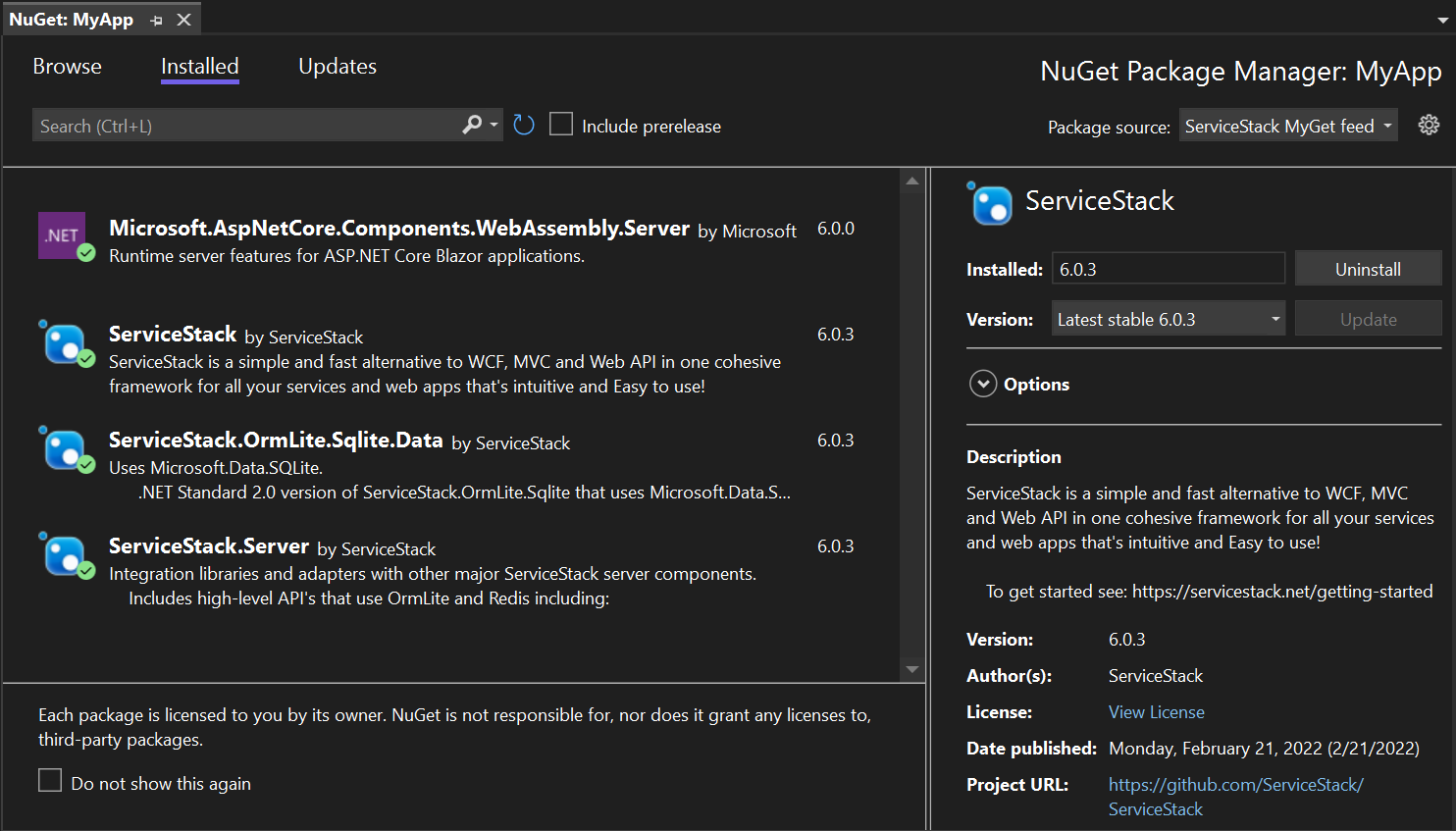 Which will allow you to search and install pre-release packages from the selected MyGet feed.

Adding MyGet feed without VS .NET #

If you're not using or don't have VS .NET installed, you can add the MyGet feed to your NuGet.config at %AppData%\NuGet\NuGet.config:

If you've already packages with the same version number from MyGet previously installed, you will need to manually delete the NuGet /packages folder for NuGet to pull down the latest packages.

You can clear your local NuGet packages cache in any OS by running the command-line below in your favorite Terminal:

If nuget is not in your Systems PATH, it can also be invoked from the dotnet tool:

Within VS .NET you can clear them from Tools > Options > Nuget Package Manager and click Clear All NuGet Cache(s): 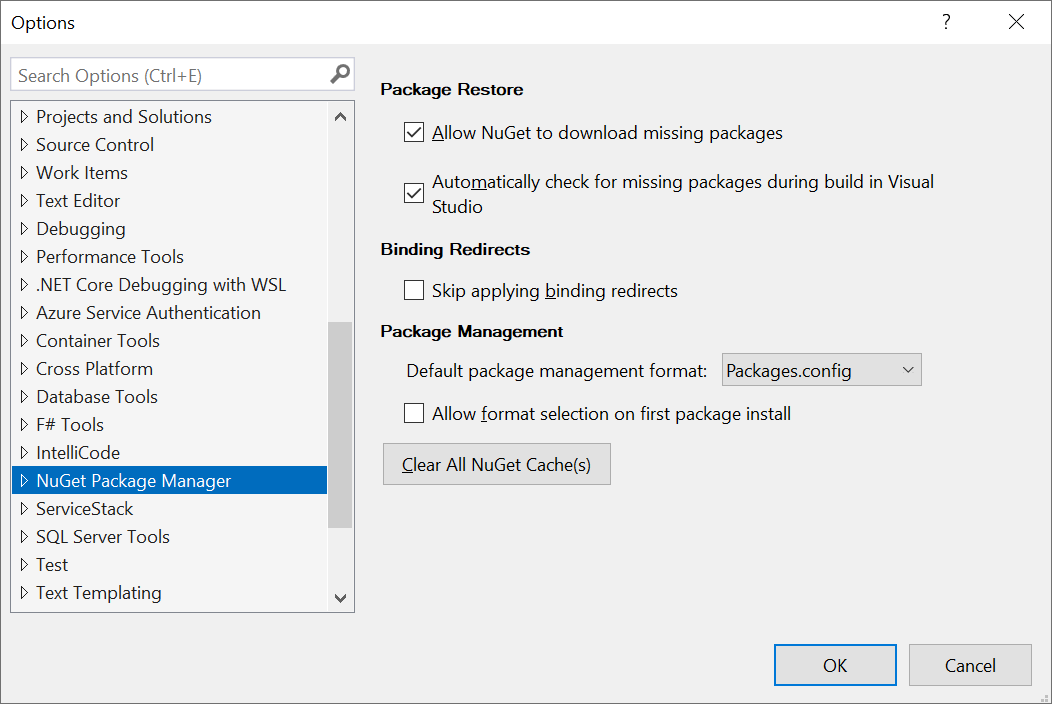 Alternatively on Windows you can delete the Cached NuGet packages manually with:

All ServiceStack packages are published together in "lockstep" with the same version number so the effort to upgrade ServiceStack projects can be done all at same time, with low frequency.

The {MAJOR} is reserved for Major releases like v5 containing structural changes that may require changes to external environment and/or project configurations. Major structural releases should be few and far between with currently no plans for any in the immediate future.

The {MINOR} version is used for major ServiceStack official releases which will have a {PATCH} version of 0.

The {PATCH} version is used to distinguish updates from normal releases where a {PATCH} above 0 indicates an Enhancement Release.

Whilst we want to minimize the effort for Customers to upgrade we also want to make any fixes or enhancements to the previous release available sooner as there are often fixes reported and resolved immediately after each release and made available in our pre-release packages on MyGet that most Customers wont get until the next major Release on NuGet.

To deliver updates sooner we dedicate time immediately after each release to resolving issues and adding enhancements to existing features so we can publish update releases before starting work on new major features. Update releases will be primarily additive and minimally disruptive so they're safe to upgrade.