ServiceStack provides a high-level Messaging API exposing a number of essential messaging features in order to publish and receive messages as well as registering and processing handlers for different message types. A class diagram of the core interfaces is below: Like other ServiceStack providers, all MQ Servers are interchangeable, visible in the shared MQ Server tests below:

In ASP.NET Core Apps we recommend using mix to configure your preferred MQ Service, other than being quicker to add, it proposes adopting a naming convention in app settings and file names that other mix features can also make use of:

If you'd instead prefer to develop stand-alone MQ Servers (i.e. without HTTP access) then it can be beneficial to run the MQ Server in an ASP.NET Core Worker Service by starting from a pre-configured project template:

The health and activity of your MQ Services can be monitored from the Admin UI Dashboard which maintains aggregate stats for how many messages have been received, processed or failed as well as detailed stats on each MQ Worker: One of the benefits of using ServiceStack is its integrated support for hosting MQ Servers allowing your Services to be invoked via a MQ Broker. There are a number of reasons why you'd want to use a MQ as an alternative to HTTP including:

More details of these and other advantages can be found in the definitive Enterprise Integration Patterns.

When publishing a IMessage<T> the message metadata are sent as HTTP Headers with an X- prefix.

By promoting clean (endpoint-ignorant and dependency-free) Service and DTO classes, your web services are instantly re-usable from non-http contexts like MQ Services.

Within MQ Services, Request DTO's get wrapped and sent within the IMessage body, which looks like: By default, MQ Servers will send a response message after it's processed each message, what the response is and which Queue (or HTTP url) the response is published to is dependent on the outcome of the message handler, i.e: 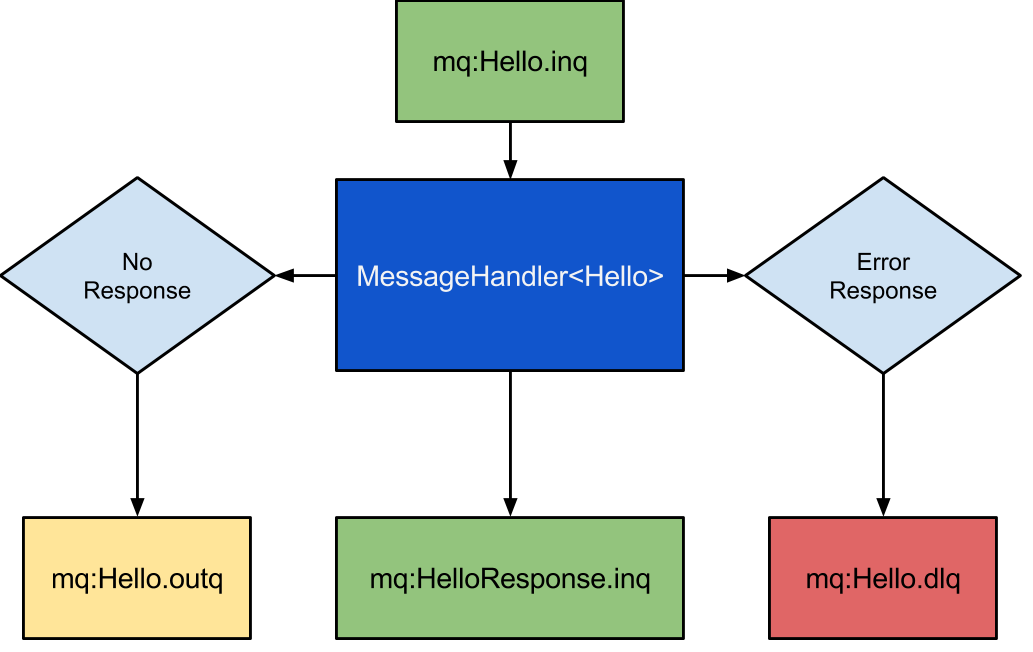 Messages with no responses are sent to '.outq' Topic #

When a handler returns a null response, the incoming message is re-published as a "transient" message to the out queue, e.g: mq:Hello.outq having the effect of notifying any subscribers to mq:Hello.outq each time a message is processed.

We can use this behavior to block until a message gets processed with:

Also shown in this example is an explicit Ack (which should be done for each message you receive) to tell the MQ Broker that you've taken responsibility of the message so it can safely remove it off the queue.

Messages with Responses are published to the Response .inq #

Often message handlers will just return a POCO response after it processes a message, e.g:

this behavior can be limited to only publish responses for types in the mqServer.PublishResponsesWhitelist, otherwise all response messages can be disabled entirely by setting mqServer.DisablePublishingResponses = true.

Responses from Messages with ReplyTo are published to that address #

Whilst for the most part you'll only need to publish POCO messages, you can also alter the default behavior by providing a customized IMessage<T> wrapper which ServiceStack will send instead, e.g. you can specify your own ReplyTo address to change the queue where the response gets published, e.g:

ReplyTo addresses can be URLs #

A nice feature unique in ServiceStack is that the ReplyTo address can even be a HTTP Uri, in which case ServiceStack will attempt to POST the raw response at that address. This works nicely with ServiceStack Services which excel at accepting serialized DTO's.

Messages with exceptions are re-tried then published to the dead-letter-queue (.dlq) #

By default Mq Servers lets you specify whether or not you want messages that cause an exception to be retried by specifying a RetryCount of 1 (default), or if you don't want any messages re-tried, specify a value of 0, e.g:

To illustrate how this works we'll keep a counter of how many times a message handler is invoked, then throw an exception to force an error condition, e.g:

Now when we publish a message the response instead gets published to the messages .dlq, after it's first transparently retried. We can verify this behavior by checking called=2:

DLQ Messages retains the original message in their body as well as the last exception serialized in the IMessage.Error ResponseStatus metadata property, e.g:

This is useful for recovering failed messages after identifying and fixing bugs that were previously causing exceptions, where you can replay and re-process DLQ messages and continue processing them as normal.

MQ Servers spawns 2 threads for each handler, one to listen to the Message Inbox mq:<Message>.inq and another to listen on the Priority Queue located at mq:<Message>.priorityq.

You can white-list which messages to enable Priority Queue's for with mqServer.PriorityQueuesWhitelist or disable them all by setting:

OneWay HTTP Requests are published to MQ then executed #

All MQ Servers support the ability to specify a whitelist of Requests you only want to publish .outq for:

Alternatively all .outq messages can be disabled with:

There are more flexible options for specifying the Queue Names where you can categorize queue names or avoid conflicts with other MQ services by specifying a global prefix to be used for all Queue Names, e.g:

Or to gain complete control of each queue name used, provide a custom QueueName strategy, e.g:

Note: Custom QueueNames need to be declared on both MQ Client in addition to ServiceStack Hosts.

As MQ Requests aren't executed within the Context of a HTTP Request they don't have access to any HTTP Info like HTTP Cookies, Headers, FormData, etc. This also means the Users Session isn't typically available as it's based on the ss-id Session Ids in Cookies.

The easiest way to publish Authenticated MQ Requests is using the same approach as Encrypted Messaging by embedding the Auth Info in the Request DTO by implementing IHasSessionId if using session-based Authentication or IHasBearerToken if using token-based Auth, e.g:

Alternatively as ServiceStack also lets you specify a Users Session ids using HTTP Headers (with X- prefix), we can instead specify Session Ids using Request Headers. To do this we can create a custom Request Context that the MQ Service is executed within and set the SessionId in the Headers:

And inject to use this Session with:

We can then Execute the MQ Service with this custom Request Context with:

See the Session docs for more info about Sessions in ServiceStack

We'll walk-through a minimal example using this approach to make authenticated Requests and access the Users Session in a Service that's accessible via both HTTP and MQ transports.

and now add the Service Implementation:

With the ServiceStack Host and Service implemented, we can start listening to both HTTP and Rabbit MQ Requests by starting the AppHost:

Then on the Client we can authenticate using UserName/Password credentials using the HTTP Service Client, e.g:

The above Request establishes an authenticated Session with the JsonServiceClient instance which has its Cookies populated with the Users SessionIds - allowing it to make subsequent authenticated requests as that User.

To make Authenticated Requests via MQ we can pass the returned sessionId into the MQ Request:

This works since we're extracting the SessionId and injecting into a Custom Request Context used by the MQ Service:

One important difference worth re-iterating is that Filter Attribute declared on the Service class are top-level filters executed during Global Request filters which are only executed for HTTP Requests:

This will allow you to separate behavior for external HTTP Requests from internal MQ Requests.

To validate both HTTP and MQ Requests, place the [Authenticate] attribute on the method itself, e.g:

The feature-mq adds MQ support to your App, complete with UI and includes 2 different ways of calling MQ Services in ServiceStack, just like example-validation UI, feature-mq is another complete working example with both UI and Service implementation in the following files:

As Configure.Mq.cs? is optional it will only add it if doesn't already exist, so it will either use your existing MQ configuration or configure your App to use the In Memory BackgroundMqService implementation.

Add feature-mq to your project with:

This will add the TestMq Service and make it available to your MQ endpoint. TestMq is a regular service that updates values in the App's registered ICacheClient and returns the Cache's current values as well as the internal Stats of the MQ:

The 2 ways to call a MQ Service is directly using the publish or sendOneWay APIs (available in all ServiceStack Service Clients) where it send the request to the Service's /oneway endpoint which will automatically publish it to the registered MQ.

Alternatively you can publish the Request DTO yourself from a different Service Implementation as done in PublishMq, as-is typical for Services that queues sending emails without blocking Service Execution.

The feature's UI allows you to publish TestMq messages using either approach:

Both approaches end with the same result with the TestMq Request DTO published and executed by the registered MQ Service as shown in the UI which is periodically updated with the current state in the Cache and the internal stats of the MQ Service showing how many messages it processed.