This release has put all the final touches together to open up interesting new use-cases for deploying ServiceStack solutions into a single self-contained, cross-platform, xcopy-able executable.

By leveraging ServiceStack’s support for self-hosting, the Virtual File System support for Embedded Resources and the new support for Compiled Razor Views, we can embed all images/js/css Razor views and Markdown Razor assets into a single dll that can be ILMerged with the preferred ServiceStack dependencies (inc. OrmLite.Sqlite) into a single cross-platform .NET exe:

To showcase its potential we’ve compiled the entire Razor Rockstars website into a single dll that’s referenced them in the multiple use-case scenarios below:

Note: all demo apps are unsigned so will require ignoring security warnings to run.

As a Single Self-Hosted .exe

The examples below merges Razor Rockstars and ServiceStack into a Single, cross-platform, self-hosting Console App, that opens up Razor Rockstars homepage in the users default web browser when launched: 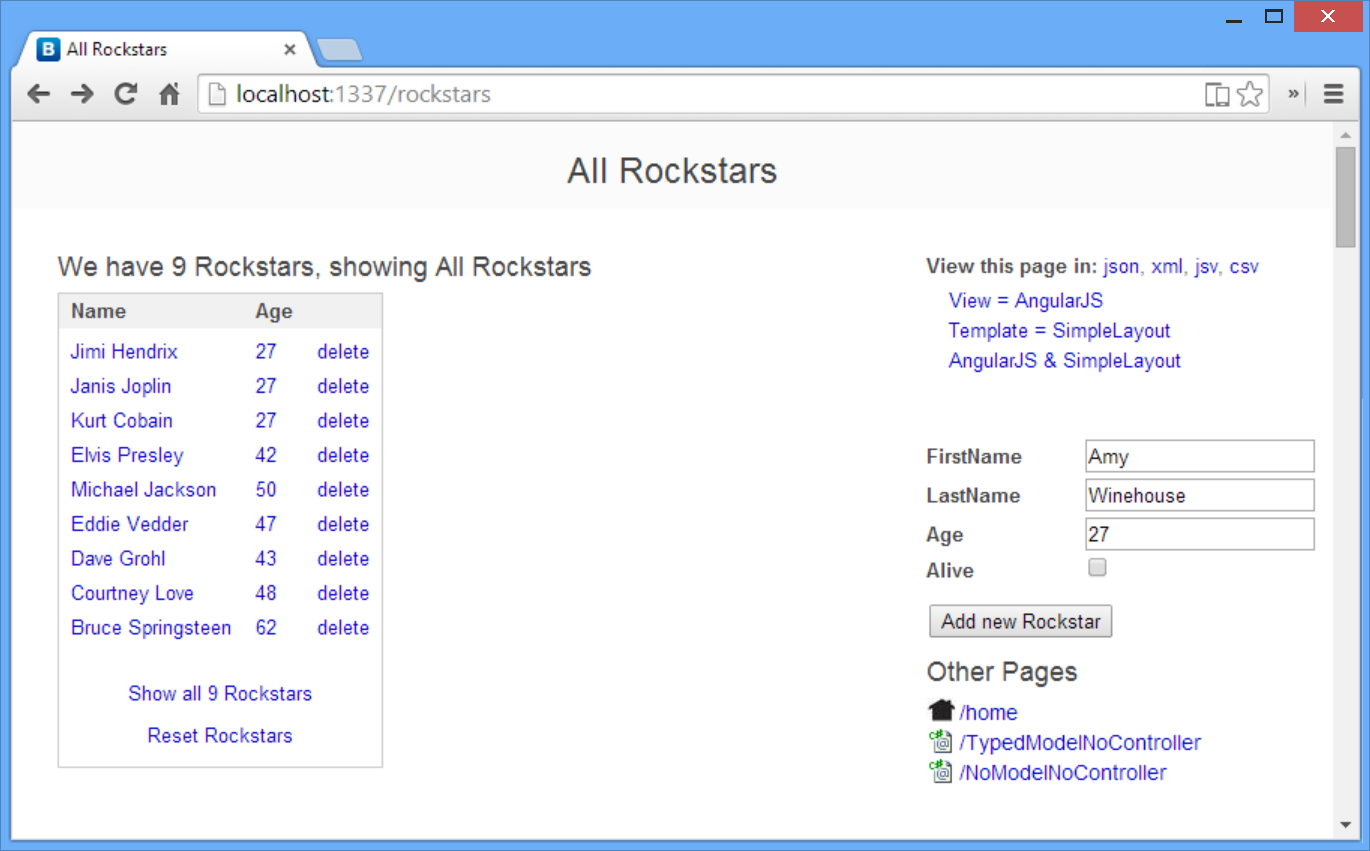 The total size for the entire uncompressed RazorRockstars.exe ServiceStack website comes down to just 4.8MB (lighter than the 5MB footprint of EntityFramework.dll) that includes 1.5MB for RazorRockstars html/img/js/css website assets and 630kb for native Windows sqlite3.dll.

You can also achieve a PhoneGap-like experience by hosting ServiceStack inside native .NET Desktop App shells for OSX and Windows: 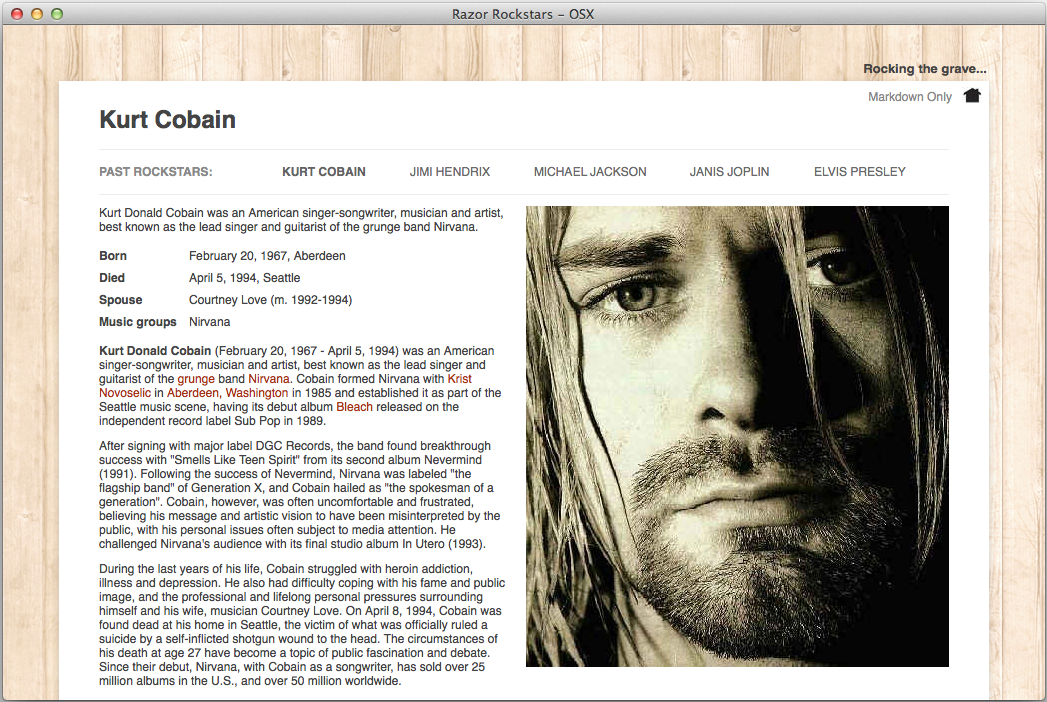 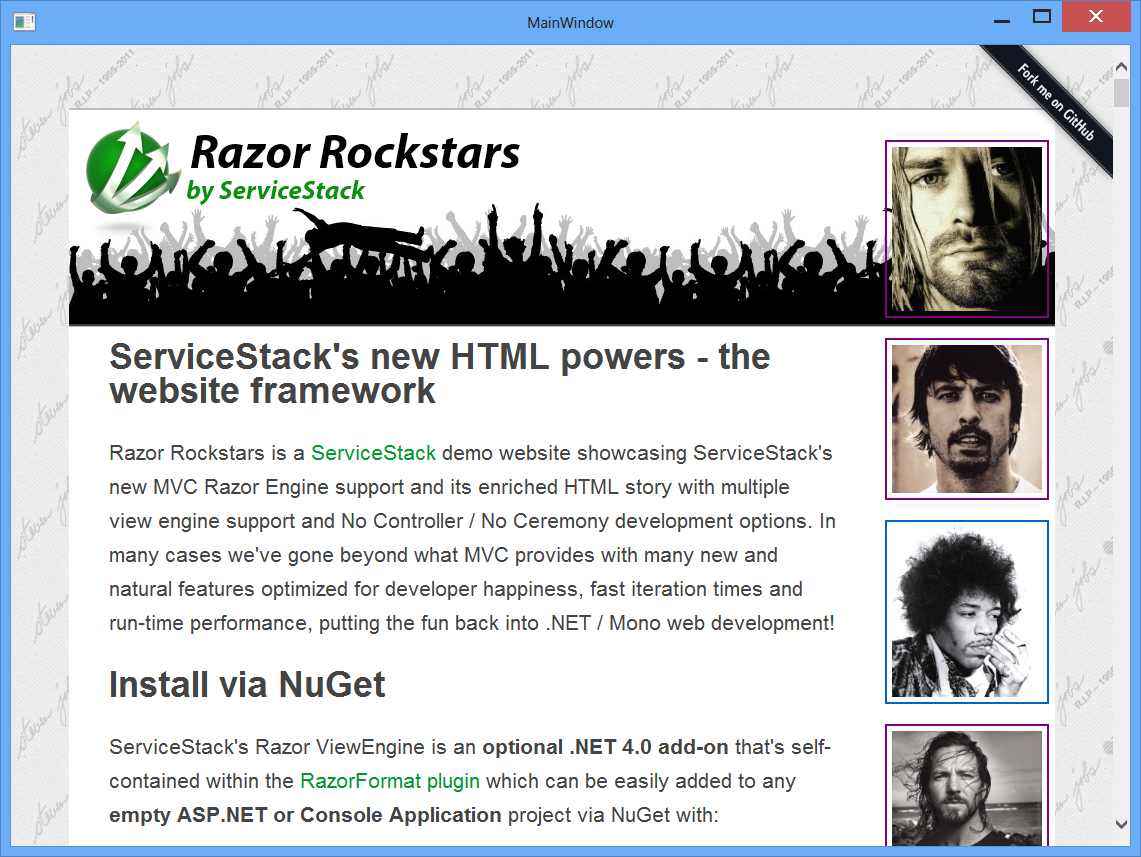 Xamarin.Mac can deliver an even better end-user experience by bundling the Mono runtime with the app avoiding the need for users to have Mono runtime installed. Incidentally this is the same approach used to deploy .NET OSX apps to the Mac AppStore.

As the only differences when using the embedded .dll is that it embeds all img/js/css/etc assets as embedded resources and makes use of compiled razor views, it can also be used in standard web hosts configurations which are effectively just lightweight wrappers containing the App configuration and references to external dependencies:

Benefits of Web Hosts referencing embedded dlls include easier updates by being able to update a websites core functionality by copying over a single .dll as well as improved performance for Razor views by eliminating Razor compile times.

Creating the single RazorRockstars.exe is simply a matter of ILMerging all the self-host project dlls into a single executable.

There are only a couple of issues that need to be addressed when running in a single ILMerged .exe:

Where BaseTypeMarker is just a dummy class that sits on the base namespace of the class library that’s used to preserve the Assembly namespace.

The other limitation is not being able to merge unmanaged .dll’s, which is what’s needed for RazorRockstars as it makes use of the native sqlite3.dll. An easy workaround for this is to make sqlite3.dll an embedded resource then simply write it out to the current directory where OrmLite.Sqlite can find it when it first makes an sqlite connection, e.g:

This isn’t required for Mono as it’s able to make use of the preinstalled version of sqlite on OSX and Linux platforms.

Support for Compiled Razor Views has landed in ServiceStack thanks to the efforts of Carl Healy.

The primary benefits of compiled views is improved performance by eliminating compile times of Razor views. They also provide static compilation benefits by highlighting compile errors during development and also save you from deploying multiple *.cshtml files with your app since they all end up pre-compiled in your Assembly.

Enabling compiled views is fairly transparent where you only need to install the new Razor.BuildTask NuGet Package to the project containing your .cshtml Razor Views you want to compile:

This doesn’t add any additional dlls to your project, instead it just sets the BuildAction to all *.cshtml pages to Content and adds an MSBuild task to your project file to pre-compile razor views on every build.

Then to register assemblies containing compiled razor views with Razor Format you just need to add it to RazorFormat.LoadFromAssemblies, e.g:

The Compiled Views support continues to keep a great development experience in DebugMode where all Razor Views are initially loaded from the Assembly but then continues to monitor the file system for modified views, automatically compiling and loading them on the fly.

We’ve added great support for the very popular Postman Rest Client in this release which is easily enabled by just registering the plugins below:

Once enabled, a link with appear in your metadata page: 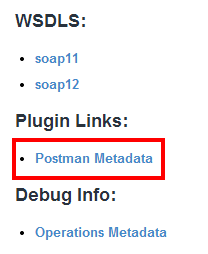 Which by default is a link to /postman route that returns a JSON postman collection that can be imported into postman by clicking on import collections icon at the top: 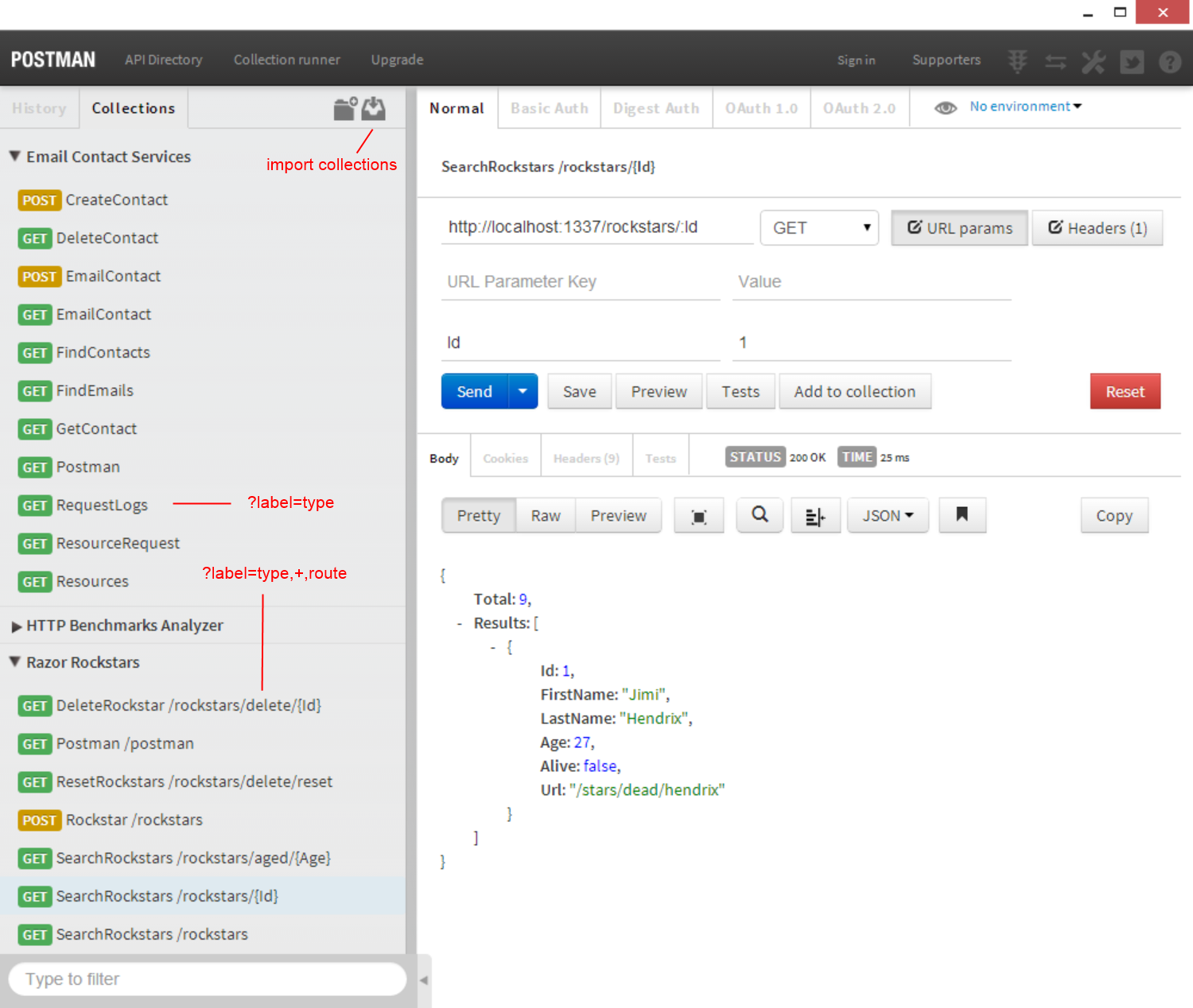 Once imported it will populate a list of available routes which you can select and easily call from the Postman UI. Just like the Swagger Support the list of operations returned respects the Restriction Attributes and only shows the operations each user is allowed to see.

The above screenshot shows how to call the SearchRockstars Route /rockstars/{Id} which returns the rockstar with the matching id.

The label param accepts a collection of string tokens that controls how the label is formatted.The type and route are special tokens that get replaced by the Request DTO name and Route respectively. Everything else are just added string literals including the + character which is just a url-encoded version of ` ` space character.

Here are some examples using the example definition below:

The default label format can also be configured when registering the Postman plugin, e.g:

We’ve also made it easy to call authentication-only services with the /postman?exportSession=true parameter which will redirect to a url that captures your session cookies into a deep-linkable url like /postman?ssopt=temp&ssid={key}&sspid={key} that can be copied into Postman.

This lets you replace your session cookies with the session ids on the url, effectively allowing you to take over someone elses session, in this case telling Postman to make requests on your behalf using your authenticated session cookies.

As this functionality is potentially dangerous it’s only enabled by default in DebugMode but can be overridden with:

Other options include hosting postman on an alternate path, adding custom HTTP Headers for each Postman request and providing friendly aliases for Request DTO Property Types that you want to appear to external users, in this case we can show DateTime types as Date in Postmans UI:

Support for Cascading layout templates for Razor ViewPages inside /Views were added in this release by @Its-Tyson.

This works the same intuitive way it does for external Razor Content pages where the _Layout.cshtml nearest to the selected View will be used by default, e.g:

The following Async versions of HTTP Utils have been added to ServiceStack.Text by Kyle Gobel:

The latest stable release of redis-server includes support for the new ZRANGEBYLEX sorted set operations allowing you to query a sorted set lexically. A good showcase for this is available on autocomplete.redis.io that shows a demo querying all 8 millions of unique lines of the Linux kernel source code in a fraction of a second.

These new operations are available as a 1:1 mapping with redis-server on IRedisNativeClient:

As well as under more user-friendly APIs under IRedisClient:

Just like NuGet version matchers, Redis uses [ char to express inclusiveness and ( char for exclusiveness. Since the IRedisClient APIs defaults to inclusive searches, these two APIs are the same:

Alternatively you can specify one or both bounds to be exclusive by using the ( prefix, e.g:

Added implicit support for escaping wildcards in typed expressions that make use of LIKE, namely StartsWith, EndsWith and Contains, e.g: 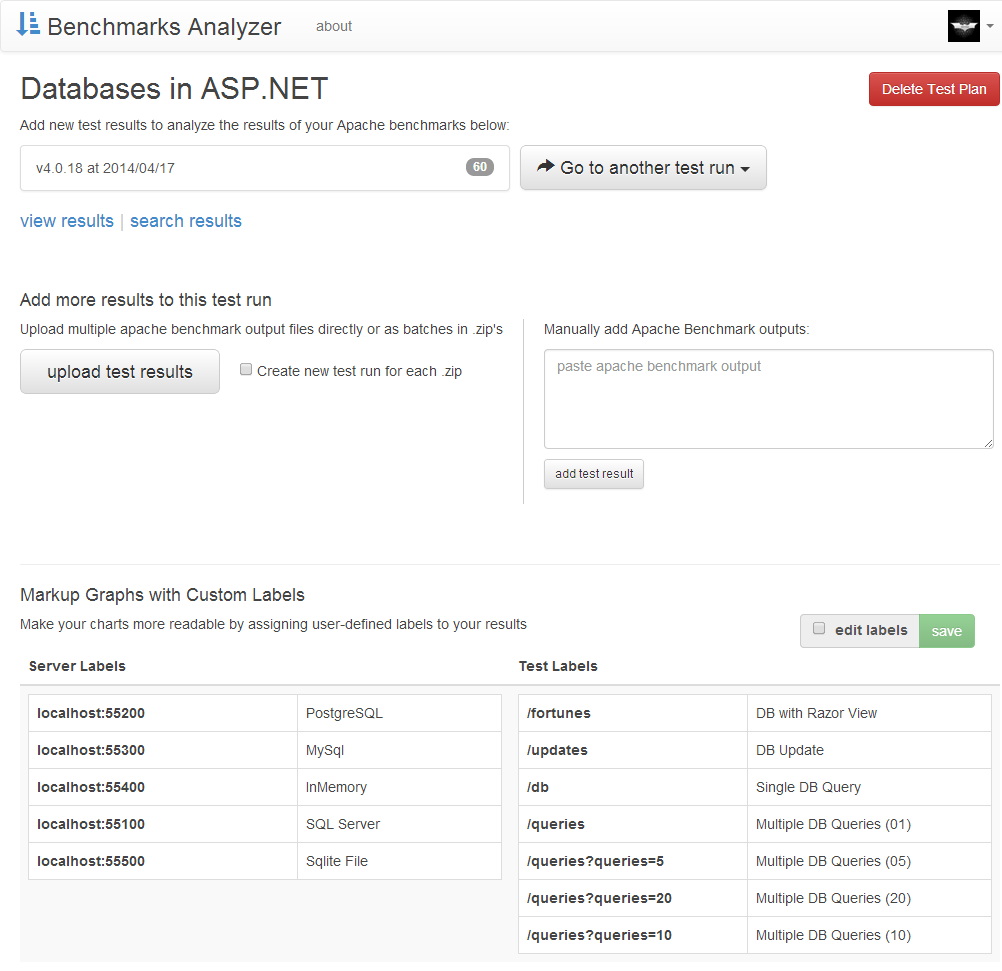 Following the release of the Email Contacts solution, a new documented ServiceStack example project allowing you to uploaded Apache HTTP Benchmarks to visualize and analyze their results has been released at: github.com/ServiceStack/HttpBenchmarks and is hosted at httpbenchmarks.servicestack.net.

The documentation includes a development guide that walks through the projects different features:

The repository also includes benchmark scripts and host projects of all ServiceStack HTTP Hosts, which all support runtime configuration of different RDBMS’s: